Okay, I figured out the issue.

The link was tooted twice because I manually messed something up (changing the URL in my RSS feed). And it was wrong because my website builder didn't add a "/" to the end (I fixed this now).

So the link should've been
https://phseiff.com/e/why-i-like-my-website/

Turns out the link is broken -_-

It's even worse considering that I wrote a whole chunk of code in my website for tooting new blog posts and essays once I publish them, and I probably spend several hours maintaining and working on this thing, and yet I finished a total of two essays over the last year (and the first one was before anyone even federated with me).

That must've been the most useless piece of premature optimization in my entire life.

Oh COME ON, don't tell me my website builder tooted that two times, like I'm a spambot or something 🤦‍♀️

(I deleted the first time now)

I decided to make a quick writeup about my website, the design decisions behind it, its architecture and why I like it even though it gets no visitors. I hope you find it interesting, and maybe it proves helpful if you want to code something similar!

I really don't get why so many people don't like verbose use of adjectives...

Being verbose allows you to be more precise and more nuanced, and helps you to somewhat circumvent the issue that language is much less expressive than human thoughts are. It increases the amount of different nuances of one thing you can express, because every "different word(ing) for something" has a different feel to it and therefore is its own word in its own right.

The same can be applied to every form of words and wording, not only to adjectives, of course. If you feel like saying something several times in several differently worded ways makes it more nuanced and closer to the idea you intend to get across, then go for it.

Don't let people tell you how much breath you are allowed to breathe into a single argument.

Kinda late for the resolution, but the one person (thanks to them! :D) who voted in my poll was right:

It is a water plant! ☘️ To be specific, it's a waterweed I took from my family's garden pond and planted into the jar I got for Xmas by my sibling, which was filled with Christmas decoration beforehand. I now breathe into the water a view times every evening to ensure the waterweed receives enough CO2, and hope that that's enough to keep it going.

You can see a comparison between the original Xmas jar and the plantquarium I made from it below! 💚🌱

Talking about plants, I got myself a new plant! 🌱 🌿
You may guess which one of the four Classical Greek elements it inhabits! :D

If my sibling was a plant, they'd be a sabling. 🌱

gh-md-to-html, a (in my totally unbiased opinion as its author and maintainer) totally epic GitHub-flavored markdown-to-html conversion tool, has an incredibly spiky download graph (sometimes, there's 800 downloads a day, sometimes, there's only like 100), plus there were 1.5K downloads over the past month, even though the GitHub repository has only 22 stars and issues from only 5 different people in total (feel free to increase this :P).... which somehow doesn't really add up.

I assume someone automatically downloads gh-md-to-html with an automated pipeline for some purpose (like a GitHub action, for example), which adds 95% of these download numbers since every re-run requires an additional installation, but like.... why would you run one pipeline 800 times within one day??? And 1.5k times a month? And if it runs on several devices rather than one, how comes I can't find anything about a use case like that via Google??

(the project in question is https://github.com/phseiff/github-flavored-markdown-to-html)

I'm currently preparing myself some (kinda?) Asia noodles (mixing soy sauce, curry and pickles, for the lack of sprouts, with the remains of the spaghetti I lived from today)...
There's nothing better than a late-night snack at 2:28, and I feel pretty validated in my idea that cooking huge amounts of side dish and eating from them over a large amount of time is a great idea :)

It's also worth noting (and pretty recommendable) that these spaghetti are wholemeal noodles, which is important for your digestion, nutrition and for keeping a healthy diet if you intent to replace all bread in your life with noodles.

You know this trope in fantasy and science fiction works of fiction, where the character(s) get(s) teleported (or moved in any other supernatural way) to a place not usually reachable through space (a pocket dimension, a room between the times, or a place within their subconsciousness), ending up right in front of an outstanding, often mystical structure (such as a pyramid, a cube, a cave entrance or a clearing) surrounded by a uniform terrain (like a grass land, a desert, an endless tiled floor, an ocean or a forest)? And they need to enter that structure to obtain the final prophecy, or face their biggest fears, or battle the final opponent, or retrieve a magical artifact? Or maybe it's not known yet why they need to enter, but it is strongly implied that they need to enter the mysterious structure, because they ended up right in front of it, and everything surrounding it is monotonous? And, of course, time outside this strange place stands still whilst they're there, or something.

Anyways, what I am trying to say is that I'd really like a story where this trope is inverted, and not just inverted as a funny side point of the story, but rather as the central plot point. I want the protagonist(s) to look at the structure, say "screw it" and walk straight into the Neverland surrounding it, where the rest of the story then takes place, either with mind-shattering plot twists (the seamlessly purely decorative area around the structure reveals the initial understanding of the context and purpose of the structure and the character's mission to enter it to be deeply flawed), or with lots of character development and interaction (internal conflicts arise or become visible as the members of the group deal with their contrasting expectations, ideas, views and emotions regarding the alien situation they find themselves in). There doesn't even need to be a complicated multi-layered setup on why they came there in the first place; the whole thing can be revealed through inner monologue or flashbacks throughout the story, or the story can start during the "final battle" in which the characters travel to the structure to defeat what's inside it (which they then don't end up doing after all, of course), without even diving into the circumstances that lead to it.

So yeah, just a random idea I had right now and decided to share.

When I was making my first burgers, I had trouble melting the cheese on top of the (vegetarian) meat, because melting it too long makes it flow down from the burger meat and into the frying pan, where it then gets burnt, and melting it shorter than that isn't an option either because I don't like to have cold cheese on my burger.
This is even more problematic when you don't have properly-sized veggie meat, so you end up using several small pieces of veggie meat that can't properly hold the cheese rather than one bug piece. Or if you like to eat an over-averagely high amount of cheese on your burger.

The solution I came up with (and I'm pretty sure lots of other people use the same solution, too) is to put a piece of cabbage into the frying pan, which you will eat on the burger anyways, and put the meat and cheese on top of it, so any cheese that flows down ends up on the cabbage leaf rather than the frying pan, and therefore won't get burnt.
This practice also comes with the positive side effect of making the cabbage soft, whereby removing the crunchy sound effect it makes when yo bite into it, which some people (including me) don't quire enjoy.

(the image below shows the sophisticated setup described above in action.)

I appear be a hidden genius 😌

I'm really baffled by the mental gymnastics of conservative elder German comedians who somehow take the iron stance that both (a) comedy is important for a democracy and (b) comedy is morally allowed to make fun of whatever it pleases, without realizing that with great importance comes great responsibility, and that great responsibility implies being morally obligated to think before talking, especially about the consequences of ones jokes and actions.
It's not that hard to grasp, really, but apparently, their goal is to remain a jester who juggles with daggers in a crowd of people, aka a fool.

I made vegetarian/ vegan burgers for my family Wednesday evening (yes, the very same day I kicked of with two wraps), and it was great! 🍔

(I really love the color composition in this pic, though, especially since yellow is my favorite color and it just dissolves into the burger and the cutting board so perfect 😍)

This was my breakfast on Wednesday, and I will use this toot to open-source my wrap wrapping ingredients. 🌮

As you can see, my wraps consist of

These ingredients are listed in the order in which they are stacked on the wrap before I fold it, and one frying pan suffices to make them (unless you happen to be pan, in which case it takes two).

My delicious breakfasts this Tuesday 🍝

I won't talk much about the awesome wrap since I just ate the same thing one day later again, and I will post some pics of that as well, but when it comes to the sauce these noodles are drenched in, it actually is the same tzatziki I coated the insides of the wrap with!

Letting dish and side dish share the same sauce gave the noodles and the wrap a uniting element of flavor, which allowed me to alternate between taking bites of wrap and taking bites of noodles without dismantling the illusion of eating one coherent seamless piece of food - a rather recommendable experience! 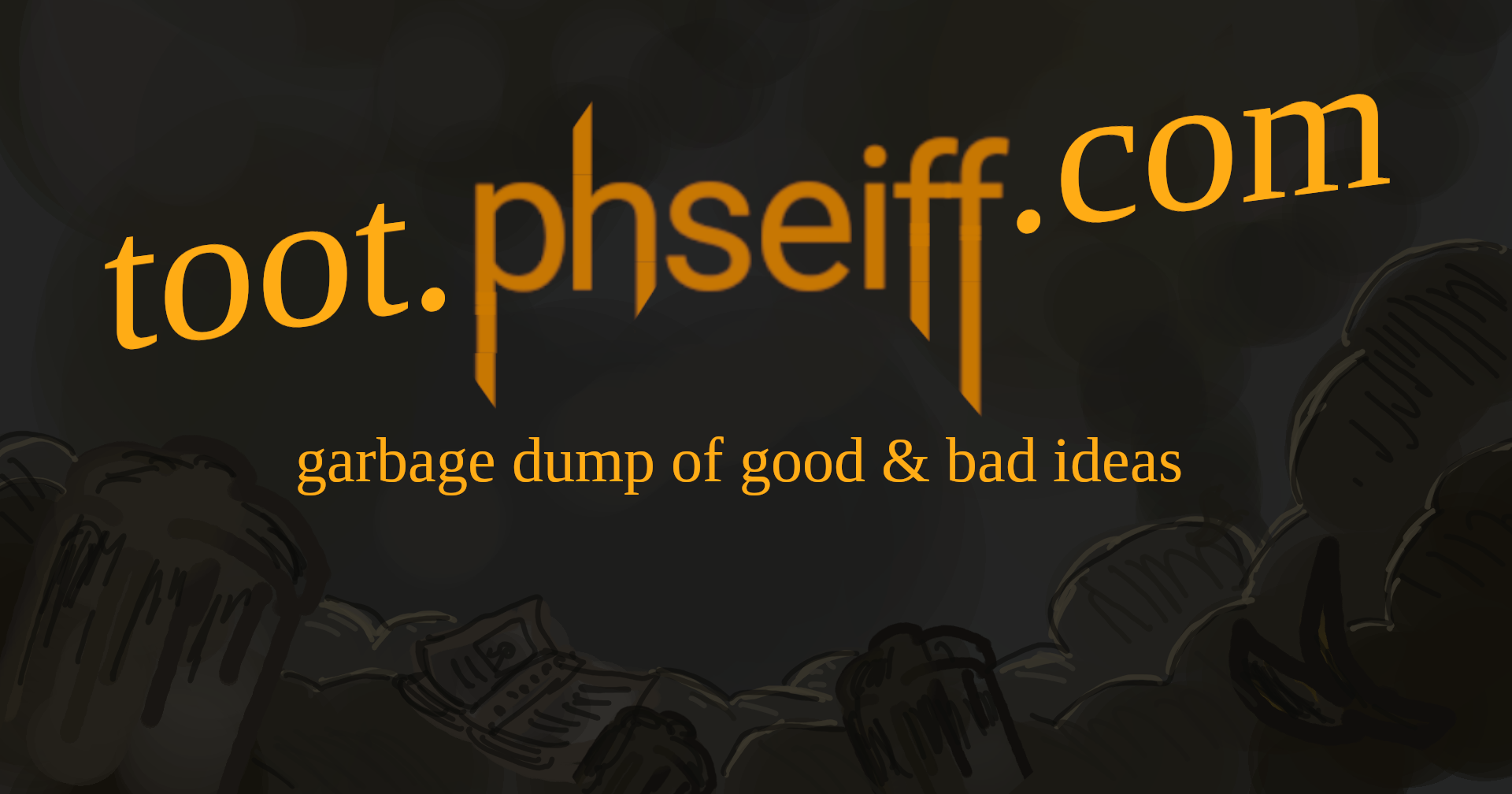 My personal mastodon instance, where I toot about whatever I find tootworthy.